“Welcome to the Club” opens at night. A ranger forces a group of survivors, wearing numbered jumpsuits, into the loading bay of a factory. They’re giving spiked poles as weapons. Walkers pound at the lift gate. A frightened man, Sanjay (Satya Nikhil Polisetti), runs away, but is forced back at gunpoint. The ranger beckons them forward and opens the lift gate. Walkers covered in molasses start oozing out. The gate jams, the walkers grab the screaming prisoners. Then the ranger’s foot as he’s also pulled inside. Sanjay runs back as the gate slams shut.

Outside of Lawton, Victor and Alicia are burning latrine refuse. The MRAV drives to the gate. The lead ranger, Marcus (Justin Smith), orders them to move the burn pits. Victor refuses. Marcus gets out of the vehicle. Victor throws a bucket of sh*t at his feet. Marcus draws his gun. But a teen girl, Dakota (Zoe Colletti), orders him to stop. Victor and Alicia are handcuffed, then taken through Lawton for the first time. Alicia thanks Dakota for helping them.

They are brought to Ginnie’s office, where a meek Daniel cuts her hair. He doesn’t recognize Alicia or Victor. Daniel has an obvious head scar. Ginnie explains he got whacked when he refused to be separated from his cat. He survived the punishment, but now suffers from amnesia. Ginnie has a job “that better suits their natural talents.” She gives Alicia back her trademark gun barrel weapon. Victor tries to speak to Daniel in Spanish. Daniel is fearful, he doesn’t know them. He gives Victor a necklace similar to one his wife wore.

In the MRAV, Victor and Alicia believe that Daniel has really lost his memory. A ranger drives them to the sugar factory. He explains the “key to the future” is in the plant. They need to recover it. Another prisoner tries to escape, but is shot by a sniper. Charlie and Janis (Holly Curran) are in the batch of prisoners. Janis explains that the night team was killed. Only nine rangers remain. Victor thinks they have the numbers to take them.

They meet Sanjay scrubbing blood off the floor. The molasses tanks ruptured. The covered walkers stick if they grab you. Sanjay admits he ran away and didn’t help. Victor, Charlie, and Alicia are taken to the weapons truck. They grab spears, but Alicia thinks Victor’s plan will fail. These people aren’t strong enough to fight armed rangers. Victor believes it’s time they make decisions and stop listening to others. They hear a noise, Dakota is hiding in the truck.

Dakota refuses to go back to Lawton. She’s Ginnie’s little sister. There’s no escape, Ginnie will kill them if they try. Dakota has seen their tapes. She tells them there’s a weapon inside the factory. Something so valuable, her sister “continues to throw bodies at it.” There’s someone out there Ginnie desperately wants to kill. She wants to use the weapon against them. Victor is skeptical, but Dakota has further proof. She overheard a deal Victor made with Ginnie.

Victor goes after an angry Alicia. Victor admits that he gave Ginnie the MRAV to keep Alicia with him. He couldn’t survive without her, “Daniel told me to remember who I was.” Alicia convinces Victor that they can’t kill the rangers. They need to get the weapon inside the factory.

That night, they back up a cattle truck to the loading dock. Sanjay raises the lift gate. The syrupy walkers come stumbling out. They are herded into the truck, then killed through the bars. The other prisoners remove the bodies as soon as they fall. The pile begins to grow. The walkers start falling over. The makeshift wall leading to the truck begins to buckle. Victor yells for Sanjay to close the gate, but he’s run away again.

Charlie and Janis race to prop up the wall. Charlie is dragged inside the truck. Dakota spears a walker and saves her. The other rangers show up. They separate Dakota from the group, and radio her location to Ginnie. Dakota refuses to leave. Victor orders them to let the wall fall. The walkers pour on top of the rangers. They are torn to pieces. Dakota hides under the truck.

Victor grabs Dakota and runs outside to an RV camper. Sanjay is hiding inside. Victor honks the horn, but the walkers aren’t distracted. He takes Sanjay’s knife, then leads him back to the factory. Victor is furious they didn’t stick with his original plan. They could have killed the rangers and been “miles away.”

Victor stabs Sanjay in the leg. He throws him towards the walkers, “Today is your day to be the hero!” The walkers surround the bleeding Sanjay. He screams as they devour him. Alicia and the others grab the ranger guns. They shoot the walkers and clear out the factory. Charlie sees Sanjay’s mangled body. Victor lies and says he sacrificed himself to save them.

They search the factory and find nothing. Victor demands to know if Dakota lied. Charlie believes her. Ginnie arrives with her men. They can’t fight her. Victor leads the group back to the loading dock. Ginnie embraces her sister. Victor offers himself for punishment. Ginnie is not angry, but congratulates them. They did something that no one else could.

There was no weapon in the factory. Ginnie was looking for the “key to survival, a true leader.” People are the key. Victor has “started an army.” He wants to know what her army is for. She will tell him in time. Ginnie gives him a key, “This will allow you to use them however you see fit.” But when the time comes for “the big show, y’all best be ready,” she warns.

That night in Lawton, Daniel cuts the molasses from Charlie’s hair. She’s heartbroken he doesn’t remember her or Skidmark the cat. Victor arrives to collect her. He now wears the key over his shirt pocket. He has her belongings. Charlie plays a song on the banjo, “End of the Line.” Daniel whistles along. Charlie tells him he taught her the song.

Charlie walks to a truck where Alicia is waiting. Janis informs them she isn’t coming. Victor wants her to remain in Lawton “on laundry duty.” He has his reasons. Victor asks Marcus for a minute with Alicia. She remarks he “has the key to the city.” Victor reassigned Alicia away from him. He didn’t trust his instincts. He can’t be ruthless with her around. She “makes him remember who he is.” He needs to forget that person. He gives her Daniel’s necklace from Ginnie’s office. Alicia gets in the truck and is driven away with Charlie.

Victor walks by Daniel as he’s getting into a horse-drawn cart. “Welcome to the club,” a ranger says approvingly. Victor tells Daniel in Spanish, he’s lucky to not remember. Outside the gates, the cart is ready to leave. But Daniel has forgotten his scissors. The ranger goes back inside to get them. Daniel hears someone whistling “End of the Line” in the bushes. A cowboy hat-wearing, heavily bearded Morgan (Lennie James) kills a walker and then emerges. Daniel remarks, “You look like you could use a haircut. I thought it was you she was looking for.” They shake hands.

Daniel was obviously playing the fool all along. Ginnie used her sister to test Victor’s strength and cunning. He has power now. And with Alicia gone, he can do whatever is needed without burdening his conscience. Using Sanjay as walker bait was just the start. Morgan and Daniel in cahoots also spell trouble for the Pioneers. The bad-ass characters are all being unleashed. Fear the Walking Dead returns next Sunday night on AMC. 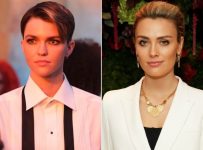 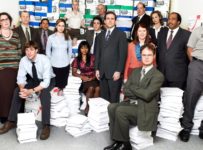 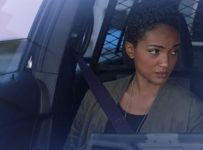 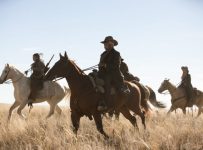