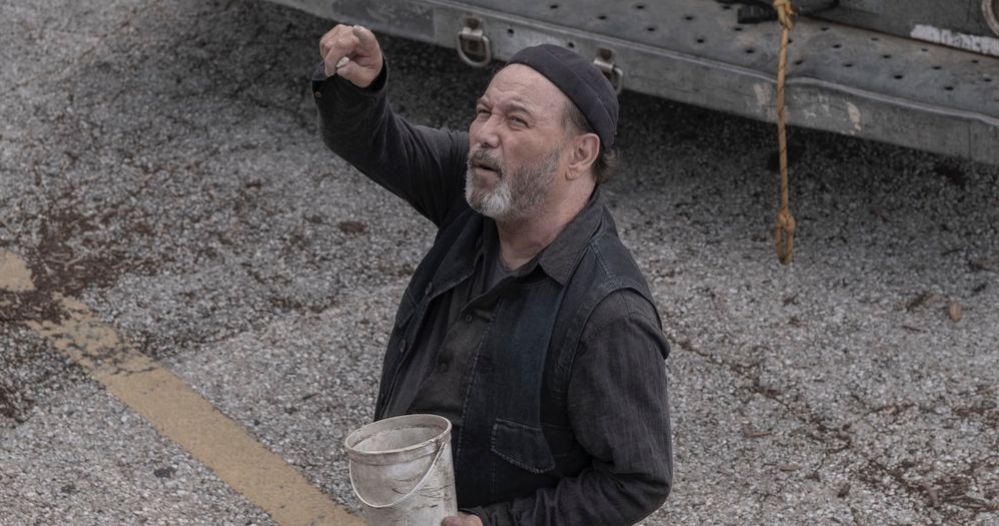 Fear the Walking Dead drops a few more clues about the mysterious Pioneers. “Today And Tomorrow” has Morgan (Lennie James) and Al (Maggie Grace) rescuing a survivor on the run. He leads them to their first encounter with Ginny (Colby Minifie). Grace (Karen David) bonds with Daniel Salazar (Ruben Blades) on a supply run. Morgan comes to an important conclusion. Al wonders if the new villains have anything to do with Isabelle.

“Today And Tomorrow” begins with Morgan on tape. He talks about his first date with his wife, then the video speeds up. The tape continues to advance, stopping briefly as he talks about his son. Morgan is sitting on a car’s hood watching Al’s camera. She wants to return to the convoy, but he feels they should drop off more boxes, “make a difference.” At their truck, they realize a gas container is missing. A sweaty and disheveled man is trying to pour the gas in a minivan. He’s confronted by Al and Morgan.

The man draws a knife, but is talked down by Morgan. He lowers the weapon, but four armed riders approach on the street. “They’ve found me,” he exclaims. Morgan and Al push the man inside the minivan. Al raises her camera to get a recording. As they hide, Al realizes they’ve left the gas cap on the street. She grabs it before a rider reaches their car. They lay quietly inside as a horse breathes on the window. The rider is called away. Morgan tells the man they will help him. He replies, “That’s what they said.”

Grace is on a building roof trying to remove the solar panels. She listens to a Don Quixote audiobook. Salazar wants to check out a record shop. He found Orange Fanta. As he loads the records in the truck, Grace gets a call from Tess with the convoy. They learn the oil field has been lost.

Al is recording the stranger. He introduces himself as Tom from Paradise Ridge. He was the HOA president of a condo complex. They survived the apocalypse for a while, but then had trouble with water, food, and repairs. The horsemen showed up and offered to help them. Then they blamed him for allowing the place to fail. They were looking to build “something bigger and better. It wasn’t about today. It’s about tomorrow.” Al perks up when she hears his verbiage. Tom continues that his sister, Janis, is still there and in trouble. Al wants to know more about the invaders.

At Paradise Ridge, a rider kills a walker approaching the gate. The riders are let in, and then the walker’s body is removed. Al records the interaction. She needs to figure out what they want. Tom has no idea. Al decides to go in and rescue his sister, but Morgan thinks she’s chasing a story. Al admits that “she needs something in there.” She asks Morgan to trust her and walks off.

That night, Al lures a walker to the gate. Morgan kills it. Al was using the undead to have them open the gate. Morgan won’t let her go in alone. He knows she’s looking for someone, and it’s not Tom’s sister. He’s upset she doesn’t trust him. Al replies that he hasn’t told her “shit about the present.” She wants to know why he’s avoiding returning to the convoy.

On the road, Salazar and Grace’s truck breaks down. They lament not being there when the oil field was taken. They grab their backpacks, Skidmark the cat in his crate, and the records. At Paradise Ridge, the walker decoy worked. Al and Morgan slip into the condo complex. They hide by the horses, but then see their fuel tanker arrive at the gate. Morgan admits he has been avoiding the convoy, but now needs to find out what happened. He wants to speak to the men, but is stopped by Al. She’s looking for someone that may be a part of this organization. They split up. He’ll find Tom’s sister.

Grace and Salazar walk at night. Salazar talks about how Skidmark was his only companion. They are attacked by walkers. Salazar drops the records. He has to leave them as they run away to escape. At Paradise Hills, Morgan has entered Janis’ apartment. He sees Al downstairs by the pool. He hears a walker locked behind a door.

Al breaks through a lock. She enters a room with charts of supplies and maps. She records a map that shows multiple settlements in Texas. All of them are denoted by a key symbol. In the apartment, Morgan opens the door. A walker with a knife in his chest bursts out. After a brief struggle, Morgan throws it over the balcony. It lands by the pool. He radios Al they have to leave now.

Al walks by the pool, but sees a guard. Suddenly the apartment walker attacks her. They fall into the water. Morgan jumps in and kills the walker with his staff. The lights in the complex turn on. Ginny is standing by the pool with her men. “You two sure know how to make an entrance,” she laughs.

In the maps apartment, Ginny offers jars of homemade jelly. Al and Morgan refuse. She introduces herself. She knows their names from the tapes. Ginny licks jelly as Morgan asks what happened to Janis. She ran off after Tom. Al chastises her for trying to kill him. Ginny retorts she’s trying to preserve “this place.” She updates them on Logan’s demise. She’s trying to do the same thing as them, but actually accomplishing it.

Ginny offers to help Morgan. She knows about the loss of his family. She recommends he talk to Miss Pfeiffer, a counselor that goes from settlement to settlement. Al asks if they have helicopters. Ginny laughs, “Helicopters? Honey we just got a gas supply yesterday.”

Ginny leads them to the condo gate. She returns their gear. Al can keep the tape. Ginny wants her to show it to as many people as possible. Morgan accuses her of holding on to the past. Ginny has had Morgan’s staff repaired. Morgan thanks her solemnly as they walk away. Ginny tells him, “This is the future. You should join us. Why suck on a stone when you could be slurping soup.”

Grace brings Salazar a Twinkie for breakfast. They took refuge in a bar. Salazar knows the records didn’t survive the night. He wanted to bring them for Charlie. She’s changed him. He asks Grace to look out for Skidmark and Charlie if anything happens. She wanted to help Morgan. Salazar tells her how Morgan was smiling at the mall.

Grace sees a guitar on stage. She’s had lessons. Grace picks it up and starts playing “End of the Line”. Salazar joins her in song. On the road, Al and Morgan are back in their truck with Tom. He laments getting them into trouble. Janis wasn’t even there. Al replies that they had “to see it for themselves.”

Al records Morgan pouring gas into the truck. He asks about the person she was looking for. Al cared about Isabelle. She wanted to know where Isabelle was from, what she was doing. There was no connection to Virginia. Morgan realizes he’s been holding on to the past. He’s done recording testimonials. He’s “good.”

Morgan radios Grace. Salazar answers at the bar. Grace is deathly ill. The radiation sickness has flared up. Morgan will come for her. Salazar sends their location. Grace tells Morgan that there’s not much time left. She thanks Salazar for singing with her.

The Pioneers, if that’s what they’re actually called, are Fear the Walking Dead’s version of the Saviors. Ginny isn’t smashing heads like Negan, but will kill to achieve her goals. Al discovers the Pioneers are not part of Isabelle’s Three Circles group. We still don’t know who they are and why Rick was taken. It’s a safe bet that Janis was the woman saved by Wes at the truck stop. The Pioneers won’t take kindly to her and Tom being sheltered. A showdown with Ginny is imminent with two episodes remaining in the season. I have a feeling she’s not the actual leader, but a lieutenant to someone far more dangerous and unforgiving. Tune in next week for season five’s penultimate episode on AMC.

Black Crab: Cast, Plot, Release Date, and Everything Else We Know 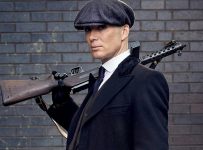 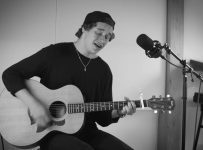 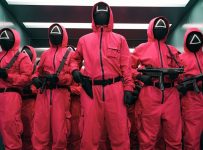 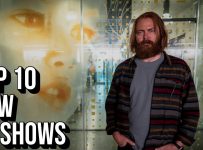 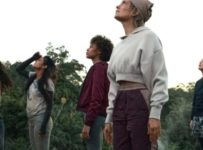 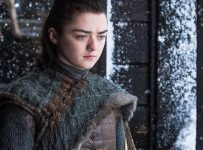